The Sacrifice (The War of the Gods Book 1) 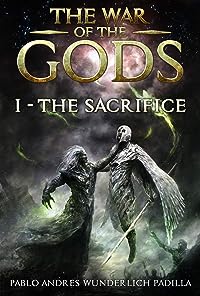 Times are strange in the Mandrake Empire. A god of the five essences has been murdered, and nobody can explain how it happened. Some say the god is still alive, that they can feel his light, although what is undeniable is that the evil from the south is spreading. Rumors say that the shadows have awakened, that in Árath, the underground castle where the demons dwell, the machinery and the dark magic have been set in motion in order to strengthen their army.A young shepherd looks after the crops and animals of his grandmother’s ranch, where he has been forced to work and abandon school. The austere times have taken a heavy toll on the soul of the boy, who begrudges not seeing young people of his own age.What the young shepherd does not know is that violence will soon be unleashed on the village and he will be forced to begin a great adventure which might bring his life to an end. The times are favorable for Chaos, and slowly the shadows have dragged themselves to a strategic point which they will attack from. The war between Light and Darkness will begin again…The War of the Gods has begun.Translated by Christy Cox and Peter Gauld from the original title in Spanish: El Sacrificio (La Guerra de los Dioses #1)