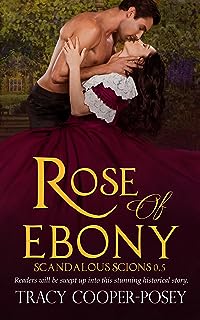 An unwanted marriage turns tragic.Raymond, Viscount Marblethorpe, eldest son to Elisa and stepson to Vaughn Wardell, casts off the solitary confines of a mourning widower to seek the company of his extended family. His sharp-eyed cousins and siblings refuse to let him lie to himself, even if he must deceive the ton to save the family from yet another scandal. The Rose of Ebony novelette is an introduction to the spin-off series following the historical romances of Scandalous Sirens.  Scandalous Scions brings together the members of three great families, to love and play under the gaze of the Victorian era’s moralistic, straight-laced society. Reader Advisory:  This story contains frank sex scenes and sexual language. This story is part of the Scandalous Scions series: 0.5 Rose of Ebony 1.0 Soul of Sin 2.0 Valor of Love 3.0 Marriage of Lies 4.0 Mask of Nobility 5.0 Law of Attraction …and more to come! A Sexy Historical Romance ___ Praise for Rose of Ebony This is a good start to a new series. I love reading any story Tracy Cooper-Posey writes. This one grabbed my attention and I couldn't put it down until I was done. Oh, how I wish this story was longer; goes without saying that I'm grabbing book two in the series. I love Victorian London books and this one was read with great expectations for a wonderful story, and it did not disappoint. Another great series is starting and it looks like it will be great just like all the other series by this author. Wow, As soon as I started Tracys Cooper Posey first book in her new spin off series Scandalous Scions I was hooked. Thank you Tracy for introducing me to this wonderful series. Ok here goes again! I never expected Tracy to leave me perched on the edge of a cliff, but she has succeeded. Having not read any historical romances before, I was amazed how quickly I immersed into this novella. Tracy describes the setting so beautifully that the imagery takes you back to that era in the past where traditions are so different from today. ___ Tracy Cooper-Posey is a #1 Best Selling Author.  She writes romantic suspense, historical, paranormal and science fiction romance.  She has published over 90 novels since 1999, been nominated for five CAPAs including Favourite Author, and won the Emma Darcy Award. She turned to indie publishing in 2011. Her indie titles have been nominated four times for Book Of The Year. Tracy won the award in 2012, and a SFR Galaxy Award in 2016 for “Most Intriguing Philosophical/Social Science Questions in Galaxybuilding”  She has been a national magazine editor and for a decade she taught romance writing at MacEwan University. She is addicted to Irish Breakfast tea and chocolate, sometimes taken together. In her spare time she enjoys history, Sherlock Holmes, science fiction and ignoring her treadmill. An Australian Canadian, she lives in Edmonton, Canada with her husband, a former professional wrestler, where she moved in 1996 after meeting him on-line.