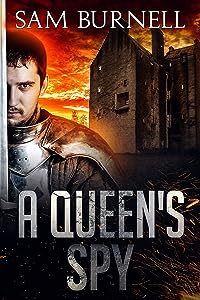 Based on actual historical events, an epic tale of a young Tudor nobleman’s courage as he tries to keep his future Queen safe in one of England’s most turbulent eras.Richard Fitzwarren, a Tudor nobleman with a dubious past takes risks for a living.As a younger man he had been attached to Thomas Seymour’s household, working with Seymour’s spy and intelligence network. Seymoure, married to Henry VIII’s widow, Catherine Parr, was as close to the power at Court as he could get. Through his wife he became guardian of the young princess Elizabeth, and so Richard Fitzwarren became a close childhood friend of Elizabeth Tudor. So close that Seymoure was readily believed when he blamed Richard for the liberties he himself had taken with the young princess. Banished from his father’s house for the crimes he didn’t commit he’s learnt his trade well in France returning to England a self styled soldier of fortune selling his services, and those of his mercenary band to the highest bidder.Now he’s back in England, his bastard sibling at his side and a band of mercenaries at his back. Despite selling his services to support Northumberland place Lady Jane Grey on the throne he remains loyal to the lady Elizabeth; soon he is embroiled in Tudor intrigue as he tries to keep the Lady safe.At his side is Jack, his bastard sibling; their relationship a troubled one. Jacks seeks to be his brothers equal but Richard has difficulty accepting him; impatient, impulsive and impetuous, he is everything Richard is not. There is a dark family secret Richard had always suspected; the final discovery of it changes the relationship between them forever. Caught up in struggle to place Jane Grey on the throne is Catherine De Bernay. Daughter of Peter De Bernay, a close supporter of Mary Tudor, the young woman finds herself losing her home and family and is forced to turn for help to the men who orchestrated her fall, the Fitzwarren brothers. Intent on revenge she finds herself on the side of others who would like to see Richard Fitzwarren’s downfall. Hidden within the text are some clues, find them, crack the code and claim the prize which is a 16th Century Tudor Ring.REVIEWSam Burnell’s historical novel, “A Queen’s Spy: The Fitzwarren Trials”, is a highly charged cloak and dagger mystery set in the troubling times that followed the reign of King Henry VIII. - Readers FavoriteDialogue and descriptive narrative carry this story along and give the reader a sense of time and place. A thrilling and educational read. Readers Favorite It is very well written, the prose really conjure up a picture and a feel for the period. The story is complex and there is lots going on and plenty to keep you turning the pages, indeed I found it difficult to put down and I was sad to reach the final pages. Josephine Jones GoodreadsThere are so many things going on in this book, but the author does a terrific job at making it all come together perfectly as well as grabbing and holding the reader’s attention from the first page right to the last. Denise Lucas Goodreads“A Queens Spy: The Fitzwarren Trials” grabs your attention and doesn’t let go. Maranda Russell GoodreadsIf you like SK Penman or Elizabeth Chadwick I think you should give this a read.I'm truly looking forward to the forthcoming book two! Amazon Review