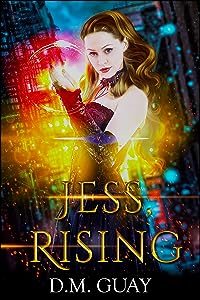 Seventeen-year-old Jess Flowers sees the killer in visions. He's a shadow, stalking Salt Creek, striking down the helpless, slaughtering with fire and lightning. After she finds the bloated body of a teenage victim at Whispering Falls, Jess realizes her visions aren't harmless, haunting dreams. They're truth.Jess is the new kid in Salt Creek, an isolated small town in rural Southern Ohio with a ferociously-guarded secret. People in Salt Creek are not what they seem, and it appears to be contagious. Her visions were just the start. She's changing, and even though it sounds crazy, she's sure the town is to blame. Billy, the outcast with the unsettling past who has stolen her heart, is the only one willing to help her. But as the body count ticks higher, evidence links Billy to the crimes. Can she trust him? Who is the real killer? Jess better piece together the clues quickly, because it'll soon be her turn to die. Murder, lies, betrayal and supernatural powers collide in this magical YA romance for fans of Beautiful Creatures, Twilight, and Vampire Diaries. This super-powered teen mystery series is perfect for fans of J.L. Weil's Luminescence trilogy, Amy Sparling's Immortal Mark series, Michelle Madow's Elemental Series, and LJ Swallow's Four Horsemen series.Winner, 2016 Romance Writers of America Joyce Henderson Contest for Young Adult romance. (Under its working title, Girl with the Sun on her Heart.)Originally published as Salt Creek Rising.