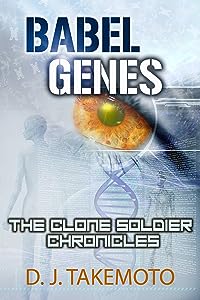 In the not too distant future, an asteroid will cross Earth’s path. Bennu is an Armageddon Class asteroid, but is also seeded with deadly virus-containing nanites. After the hit, the few remaining human species on the planet are mutants. Living in small colonies they have survived through the rising ocean, the heat of a vast dry Earth, and massive food and animal extinctions. The most serious problem is survival of the species, any living species. Because the biggest issue is they cannot produce live offspring; the surviving populations have become too genetically divergent. Like the biblical Tower of Babel, their genes cannot communicate. An archeo-historical team dives deep into the submerged desert to retrieve a box. They hope to find clues, because the ancient leader, Dorian, a half computer/half bioengineered human, remembers the words of a dear friend’s last letter, “Do not destroy this letter. You will need it to grow.” Finding the letter, and deciphering its contents becomes a race against time. All organic life on Earth is rapidly succumbing to the virus. Soon, only AIs will populate the planet.And now after over 800 years of life, Dorian understands he must soon leave, and he knows the letter has the key life, to overcome the Babel genes. Without this key, the new human subspecies cannot mate, or become the next ascending sentient species on Earth. Babel Genes is a love story about Dorian and Dina, a halfsie from long ago; she was the first of her kind to live, a mutant who was accepted neither by humans nor the illusive and powerful non-human Catori tribe. Dorian is a cloned human, enhanced with brain implants and kept for the first eighteen years of his life as a prisoner in an underground military complex. He was their human computer. We discover, through Dina’s diary, how this unlikely pair finds love, acceptance for each other, and shape a future world; a world populated by human mutant subspecies that finally accept each other, but can’t seem to produce live offspring. Babel Genes spans from almost current time to 2807. It describes a fragile period on Earth, during which the progress of our science too rapidly surpasses our human moral perspective.