The Loyalty of Water 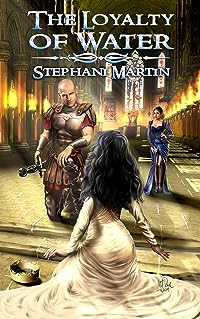 Liam and Seth are military, honorable, fierce, beautiful…and cursed. The war of their immortal society is not with foreign enemies, but with their own women. Passed over for the crown which fell to her military brother, Lady Mea has enacted a vicious curse to end procreation. Children are no longer born, and society is dying as women blame men for their barrenness. Families are a thing of the past as warriors find themselves unloved and abandoned.Seventeen-year-old Rhyenn is called ‘water.’ She is the King’s heir and esteemed by the military who hope to gain her loyalty. It is believed she can rule after the King, thwarting Mea and her punishing war. Mea believes this, too. Knowing it, she conjures the underworld and sets its dogs upon Rhyenn and the men, causing them to fight Hell itself. To survive the hellish plots and conjuring of the Lady Mea, the military warriors must gain THE LOYALTY OF WATER.