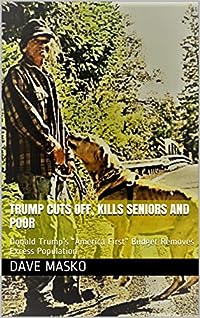 Trump Cuts Off, Kills Seniors and Poor, by Dave Masko. Donald Trump wants to cut-off and then kill as many of America’s poor as possible, say concerned seniors Trump’s age who decry this odious billionaire’s proposal to eliminate various senior and anti-poverty programs so as to pay for tax cuts for the top 1%. Fellow concerned seniors say the Trump and Republican establishment do not care about the poor, elderly and low-income sick in America. In fact, their views are shared in this collection of “new journalism” essays and reports that point to Trump not thinking America’s poor actually deserve of help. As for Trump’s campaign promises, “it seems to be just pie in the sky empty promises that Trump used to get elected,” say concerned seniors worried about Trump cutting Social Security, Medicare and other entitlements. Trump’s “alternative facts” come amidst concerns about the so-called “America First” budget this 70-year-old billionaire who wants to funnel $54 billion in funding expensive new defense programs; while the Trump budget slashes Social Security, Medicare, Medicaid, Meals-On-Wheels and hundreds of other entitlement programs. While Trump promised America’s seniors and poor lots of help when running for office, the reality is “Trump’s budget is all about resentment of the elderly and poor,” says Misty Crowley who volunteers at a senior care facility in Newport, Oregon. “Trump aims to cut off the elderly and poor from the entitlements of Medicare and Society Security under some skewed logic that the government should not be spending money on people who need meals or a leg up in this life. Just to say ‘we are cutting Meals-On-Wheels’ is simply horrible to say or place in such a budget because it sends the message that the country doesn’t care, has zero compassion for seniors, the sick and the poor,” added Crowley with a deep sense of chagrin. Crowley, 71, said she’s sick at heart “to think this rich Trump wants to first cut off and then kill seniors not well-off and wealthy like him. No wonder Trump’s dealing with the Russians because he is as cold in his heart as Putin and other evil ones.” Trump’s budget priorities are aimed at hurting struggling seniors and lower and middle-income families because this billionaire rules as a dictator without any sense of empathy or compassion, say seniors Trump’s age who view these budgets cuts as a sort of class resentment. Meanwhile, fellow senior Robert Redford is also speaking out against Trump’s proposed federal budget cuts, saying that the funding plan “is entirely the wrong approach at entirely the wrong time.” Redford, 80, added: “I’m asking you to please join me in adding your voice to the chorus of concerned citizens by contacting your congressional representative and voicing your opposition to these cuts.”