In the Shadow of Dragons 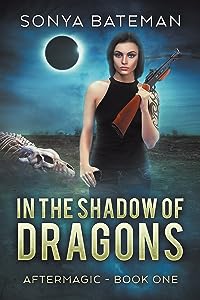 Everything changed when the dragons came.In a post-dragon America where magic has become a terrifying infection, the Bishop Corporation runs the show. Under the direction of CEO and dragon-slaying hero Julian Bishop, the company produces the magic-suppressing drug HeMo. They also 'protect' the population by arresting anyone with Magesign, the mark of using magic -- and killing people who change into something else.But not everyone subscribes to BiCo's brand of protection. The Darkspawn, a small group of magic-using rebels, fight to destroy HeMo and end Julian Bishop's magic extermination campaign.Teague Harlow, a Knight working for BiCo as a monster hunter, is sent to join the Darkspawn as a spy. Her mission is to pinpoint their hidden base in the Wyoming badlands, so the Knights can end the rebellion with a single attack.Instead she begins to learn that Julian Bishop isn't the hero everyone believes -- and the true threat to the world lies in the drug that's supposed to save it.