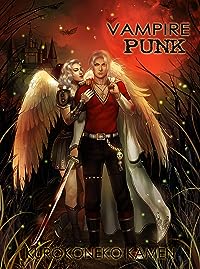 A villainous vampire with a broken heart…When twilight falls vampire Slaine Morvyn prowls the city of San Francisco hunting bloodthirsty vampires…for fun. Slaine is no hero. And he’s definitely no saint. Ever since his unrequited love Rebecca Thorn married his rival Druid Vampire Hunter, Derek Dearg, he’s been drowning his sorrows in promiscuous sex, drugs and alcohol. An angel’s forbidden love to mend it…Rogue Archangel Uriel is a little different from most angels. When she goes against the rules and saves a vampire that was fated to die - she gets assigned to be his guardian angel. Now, she must try and help him to find true love so that he can be redeemed. She risks losing her wings when she falls for him instead.Hell hath no fury like a woman scorned…When Slaine rejects a vampire witch named Iona she angrily places a cursed tattoo on his neck that resembles a black, thorny vine. The curse will bring his greatest fear to life as it slowly kills him in a matter of weeks. Once his fear has consumed him completely the tattoo will decapitate him. The only way to break the curse is for Slaine to kill Iona. Will Slaine find the key to reawaken his dormant Druidic powers before it’s too late?