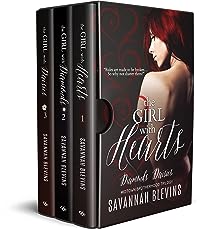 THE GIRL WITH HEARTS - BOOK #1Henrik Rylander doesn’t just participate in Manhattan’s dating scene—he owns the exclusive rights to it…As the newly-minted captain of the New York Rangers hockey team, Henrik’s coach wants him to clean up his reputation. But Henrik isn’t quite ready to give up charming panties off co-eds, so he decides to indulge in one last night of uninhibited freedom.Leila Blakely has never been the “cry into your Baskin-Robbins” type…When she figures out her boyfriend has been cheating, she has only one objective—vengeance. Conveniently, the jerk’s arch-nemesis and her secret college crush, Henrik Rylander, is in town. She cleverly surprises Henrik in his hotel room and makes him an offer consisting of sex, lies, and the bathroom wall at the Regency. So what if she forgot to mention she was a virgin?THE GIRL WITH DIAMONDS - BOOK #2Purple wig, red lips, and a flirty smile—those are the only things Austin Blakely remembers when he wakes up tied to his bed…It’s Austin’s job as the enforcer for the New York Rangers hockey team to strike fear in the hearts of grown men. But if Manhattan’s notorious gossip magazine, The Whisperer, catches wind of his dating fail—or worse, took a picture of him in his compromised state—his reputation and career could be ruined.Magnolia Cross is still running from rumors that robbed her of the interview of a lifetime…Intern reporter for the Madison Square Garden news affiliate isn’t Magnolia’s idea of a dream job. She doesn’t even like hockey. But it’s experience on-air, and that’s what counts. After a prank-gone-wrong leaves her stripped of her Valedictorian title, she loses her initial chance at making it big. But now she’s stronger and smarter, and won’t let trust issues screw her out of her chance for success—again.One bad interview and two million YouTube hits later, Magnolia is a media sensation—for all the wrong reasons…THE GIRL WITH DAISIES - BOOK #3Callen Copley isn’t some reality TV bachelor who needs his friends’ interference. He enjoys the freedom and solitude of being single…Callen is the strong silent type and he’s totally comfortable living the bachelor life while all his friends settle down. As a rising star on the New York Rangers, Callen has to focus on his game. His contract ends this season and he’s hit a horrible slump, so he can’t afford any distractions. Especially a pretty blonde distraction with flowers in her hair who works down the street. Penny Duchene’s willpower has finally met its match…