Into the Darkness: The Harrowing True Story of the Titanic Disaster: Riveting First-Hand Accounts of Agony, Sacrifice and Survival 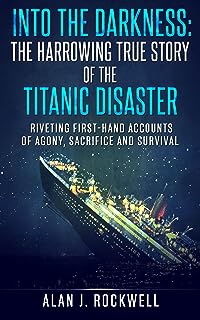 They are all gone now―the Titanic survivors. No human being who stood on her decks that fateful night was alive to commemorate the event on its 100th anniversary. Their stories are with us, however, and the lessons remain. From the moment the world learned the Titanic had sunk, we wanted to know, who had survived? Those answers didn’t come until the evening of Thursday, April 18, 1912―when the Cunard liner Carpathia finally reached New York with the 706 survivors who had been recovered from Titanic’s lifeboats.Harold Bride, “Titanic’s surviving wireless operator,” relayed the story of the ship’s band. “The way the band kept playing was a noble thing. I heard it first while still we were working wireless when there was a ragtime tune for us. The last I saw of the band, when I was floating out in the sea with my lifebelt on, it was still on deck playing ‘Autumn.’ How they ever did it I cannot imagine.”There were stories of heroism―such as that of Edith Evans, who was waiting to board collapsible Lifeboat D, the last boat to leave Titanic, when she turned to Caroline Brown and said, “You go first. You have children waiting at home.” The sacrifice cost Evans her life, but as Mrs. Brown said later, “It was a heroic sacrifice, and as long as I live I shall hold her memory dear as my preserver, who preferred to die so that I might live.”There was mystery. There was bravery. There was suspense. There was cowardice. Most men who survived found themselves trying to explain how they survived when women and children had died. But mostly, there was loss. On her return to New York after picking up Titanic’s survivors, Carpathia had become known as a ship of widows. Rene Harris, who lost her husband, Broadway producer Henry Harris, in the disaster, later spoke of her loss when she said, “It was not a night to remember. It was a night to forget.” Drawing on a wealth of previously unpublished letters, memoirs, and diaries as well as interviews with survivors and family members, veteran author and writer Alan Rockwell brings to life the colorful voices and the harrowing experiences of many of those who lived to tell their story. More than 100 years after the RMS Titanic met its fatal end, the story of the tragic wreck continues to fascinate people worldwide. Though many survivors and their family members disappeared into obscurity or were hesitant to talk about what they went through, others were willing to share their experiences during the wreck and in its aftermath. This book recounts many of these first-hand accounts in graphic, compelling detail.