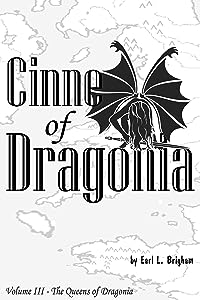 High fantasy, horror and mythology intertwine in Cinne of Dragonia. The action-packed concluding volume in The Queens of Dragonia trilogy follows the life of the title character, Cinne, in a world where the number of dragons is much-reduced and magic is waning.On the map, Cinne takes the reader from the already-familiar places of the two earlier books. The story moves away from England, Wales and Brittany and on into Scotland, Denmark, Sweden, and Poland. As in the earlier books, the vast majority of locations reflect real places that can yet be seen. The novel is an interwoven tale filled with both original characters and several historical competing pagan gods, dragons, mermaids, humans, a myriad of monsters, werewolves, vampires, dwarfs, evil spirits, faeries and valkyries, with numerous shape-shifters among them. Cinne, as a character, is part human, part dragon, part mermaid and part dwarf, the inheritor of several royal lineages. Although just a child, there are the greatest of expectations, the highest of hopes, placed upon her.There are heroes and evil creatures, but there are are also several characters that neither purely good nor purely evil, but something in-between, many drawn from ancient myths, religions and legends.What would Dragonia be without dragons? Several existing dragons and myths surrounding them are woven into the novel. (Najciemniesky, Niddhogg, Balaur, Vishap, the Zduhaci, Azdaja, and the myths of Zmey Tugarin, as well as the dragon of Wawel Hill.)Part of the mermaid stories come for existing mythology, including the character Jurate, who is, in the Baltic, considered the queen of the mermaids, and the unnamed mermaid who is considered to be the defender of Warsaw, Poland, an inland city.The mythical elements draw from several sources. There are some Viking-era elements, particularly some lesser-know myths, with gods and giants presented more true to their original forms than is usually done in modern fantasy. (Thor, Odin, Tyr, dwarfs, the once-and-always warriors, several giants and valkyries.) There are also several Slavic gods and a reconstructed myth from the Baltic. (Perun, Praamhius, Svetovid, the Mother of War, the Grave Mother, the Mother of Wraiths, and others.) Parts of two rather famous Russian tales are central to the story. (Kosciej the Deathless and The Maid of the Copper Mountain) A few Celtic characters from earlier in the story reappear (Arianrhod and Belatucadors among them,) along with individuals not previously involved in the story. WARNING! Cinne of Dragonia recaptures some ancient tales that are sometimes quite brutal, with certain characters that are not intended to be likable. Certain parts of the story are about very violent creatures involved in horrible events, and fantasy war. Portions of this novel contain graphic violence. As a whole, Cinne of Dragonia is a story of impossible hope, love, growth and daring, set in a world of the undead and blood-thirsty gods gone amok, while the end of magic grows nigh.There is much more information on each individual book, including Cinne, and the series as a whole on the website https://thequeensofdragonia.com/.