The Quarry Bank Runaways: The Journey to London of Thomas Priestley & Joseph Sefton in 1806 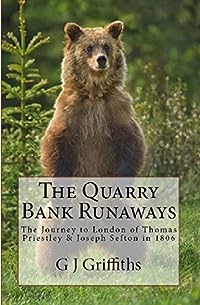 In the early 19th century, when it was the policy of many of the poorhouses and workhouses to deter paupers from applying by making the conditions inside harsh and unpleasant, two boys set out on a journey to Hackney Workhouse in London. Their starting point was in the pleasant Cheshire countryside, where they were apprenticed to the cotton mill built by Samuel Greg in 1784. Children as young as 9 would be employed there, as scavengers, piecers, mule doffers or can tenters. These jobs could be just as unpleasant and difficult for a poor child as those we may have heard of, such as chimney sweeps and match girls.Quarry Bank Mill was some 200 miles north of London and the boys had to sneak out unnoticed and then attempt to walk all the way. It was likely that these enterprising travellers took advantage of the drovers’ roads and the newly developed “motorways” of the times – the canals. Perhaps they were lucky enough some days to hitch a lift; their general direction of travel taking them to Beartown, the Potteries, Dunstable Downs and eventually to London. Whatever challenges they encountered along the way archive evidence shows that they made it.Runaway apprentices had become a problem for society during the years of the Industrial Revolution – so what had prompted Thomas and Joseph to do such a hazardous thing? What happened to them on their long journey? Did they receive any help? Or were they chased relentlessly wherever they ran, since what they were doing was illegal in the eyes of the authorities?This is the story of their adventure and it concludes with the events in the Middlesex courthouse, known then as the Old Sessions.