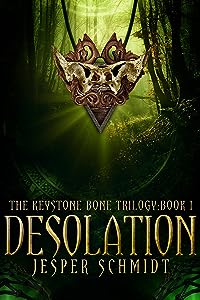 Eons has shrouded the giant dragon in legend. Ancient myths soon become terrifyingly real…Aea is an outsider. At age six the clan executed her father and when her mother and sister disappeared, Aea’s life spiraled into chaos.Suddenly staggering out of the woods, broken by the deadly disease the Field Blight, her mother lays a desperate choice on Aea. To leave the protective forest realm and save her sister from mortal danger.In a race against time, Aea puts the noose of the Field Blight around not only her own neck, but also that of her unborn child.Before long, Aea discovers that the world of Erisdün is nothing like she imagined. Surviving the Field Blight might be the least of her concerns, as the great dragon dispatches his army to retrieve the Keystone Bone.The bone of a God is the only component that will prevent the Arch Demon from breaking free. Powers as old as time itself are about to set the world on fire.Desolation is an epic fantasy.If you like a fast-paced read with dragons and demons, then you will love Desolation.Delve into the exciting adventure today.This is the first book in the Keystone Bone trilogy.(Must be read in order)