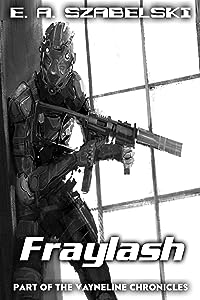 Among the most wanted of criminals are those who have killed specially trained ‘Hunters’ that have come after them. Frayno is the latest of a series of Hunters that have targeted the rebellion leader Lashia. She is a Hunter-Killer who has left a pile of Hunter bodies. Smart and skilled, she rallied a city behind her. Frayno is one of the best and what starts as a routine hunt starts to get personal as Lashia constantly plays with his life, setting traps only to let him escape at the very end. Claiming there is a reason she has not killed him outright, he hopes to take her down in her arrogance; but as things progress he starts to see there is a reason he was involved in the first place.This story is part of the new VayneLine series that explores humanity’s near future of living across the stars and under the Aelisha alien empire. After Earth was environmentally devastated and amidst a nuclear war, the Aelisha step and save us; but in return for being uplifted and given their advanced technology, we become a subservient/proxy race of sorts for their empire. The stories blend fast-paced action with deep philosophical questions regarding time, fate, and individual will. The stories do not need to be read in order but each story ties together in a larger narrative.Visit www.Vayneline.com for more information on this story and all of the other stories in the VL universe. It contains information on technology, characters, concepts, and much more regarding the expansive canon. There you can read more in-depth information about every story, as well as see the connections between them along with additional facts beyond just the books.