It's a Hip Hop Hip Hop World For Every B-Boy and B-Girl: History For Kids (Culture For Kids Book 1) 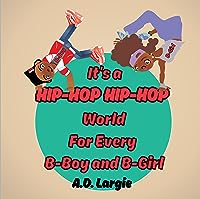 The Breakdancing is so spectacular!The Graffiti Spray Painting is so amazing!The Rap Rhyming is so inspiring!The Human Beat Box sound is so profound!The Street Style is so wild!Hip Hop B-Boy and his sister Hip Hop B-Girl have a problem, they are broke and it's not a joke. They know they can do so much more even though they are poor, they believe in themselves even if the world says no.The needed to express themselves so they dug deep into their soul to reveal a culture that the world would forever know. The name of this culture is called Hip Hop. Now Hip Hop B-boy and B-girl is on a mission to overcome poverty and change the world by harnessing the power of their art and culture.BOOK FEATURES:Beautiful illustrationsSwagHip Hop HairBreakdancingRhymingBOOK BENEFITS:How to overcome adversityThe power of believing in themselvesTo be proud of their culture and historyHow not to be discourage by disappointmentHow to using ideas to solve problemsThe concept that everything physical starts out being mentalHow to realize their desires through creativity and persistence The concept of creating value through their ideaThe importance of understanding businessHip Hop HistoryThe evolution of Hip HopBlack HistoryThis book is a great read as a family before bedtime.The kids will enjoy the characters visuals and cool Rhymes in the book and learned some valuable lessons at the same time.AUTHOR COMMENTS:As a member of the Hip Hop generation and as a parent, Hip Hop was a huge influence on my life in high school and college. Admittedly, I don't listen to much of the Rap Music today but it doesn't take away from the incredible way that Hip Hop affected the world in just a couple generations. This book is a wholesome way to introduce Hip Hop history and art of not just Rap but all the 5 elements of Hip Hop to children. The story explains the impact and art created by poor kids from the Bronx, New York in the late 1970's and how it became the Hip Hop business of today in a simple beautifully illustrated way that kids can understand.