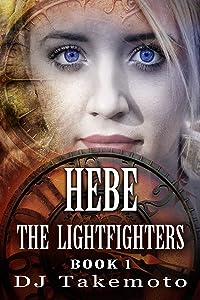 Hebe, the Lightfighter Asteroid!After the asteroid hits earth, the fate of the human species rests in the hands of The Lightfighters, in this dystopian, steam punk thriller of life on an asteroid from the author of The Clone Soldier Chronicles. Adam and his best friend Celine live on the asteroid 6-Hebe in the last settlement of about a thousand humans, on the edge of the void, in a plasmon shield-enclosed city. But the shield is failing, they are running out of supplies, and the rulers have forgotten how to run things, get replacements, or even where they came from. And in their paranoid attempt to keep everyone calm, they have established a dictatorship…except they used to be the upper management executive division of an asteroid mining firm before the mysterious event occurred on earth, so they aren’t doing a very good job.Since they were six-years-old, Adam and Celine have been sneaking into the forbidden archives to accomplish the unthinkable…learn to read. In the process they find passwords and access codes explaining who they are, and where they came from. And now sixteen and in a race against extinction, Adam must find the hidden bunker on the dark side of Hebe to save Celine. And only he can do it because he is a Lightfighter. Chances of an Asteroid EventTwo years ago NASA began their Asteroid Redirect Mission. A big one is due around 2176 with an extremely high probability of hitting earth. What happens if they fail to deflect that big rock? Will we have people living on a moon settlement, or on Mars? The novel 6-Hebe is the first in the trilogy, The Lightfighters, describing what life will be like living on a captured asteroid.From the NASA website:“NASA is developing a first-ever robotic mission to visit a large near-Earth asteroid, collect a multi-ton boulder from its surface, and use it in an enhanced gravity tractor asteroid deflection demonstration.The spacecraft will then redirect the multi-ton boulder into a stable orbit around the moon, where astronauts will explore it and return with samples in the mid-2020s (from: http://www.nasa.gov/mission_pages/asteroids/initiative/index.html, http://www.space.com/20606-nasa-asteroid-capture-mission-images.html, and http://www.nasa.gov/feature/companies-selected-to-provide-early-design-work-for-asteroid-redirect-robotic-mission).”The Author:DJ Takemoto spent thirty-two years researching vision at a Midwestern university. But the salmon instincts took over, and in 2011 she migrated home to California. She misses the lab, but finds she can do more cutting edge research at her computer writing science fiction and steam punk novels set in a global warming future. For the last five years, she has kept busy creating that world of clone soldiers and courageous new world asteroid dwellers whom must live with the mess we have left for them. See the Facebook page for The Clone Soldier Chronicles at:https://www.facebook.com/The-Clone-Soldier-Chronicles-897172786970526/?ref=aymt_homepage_panelPrologue327,000 bce“You are certain this planet will suffice?”“There are few to select from at this point…so early.”“But the up-top is so hostile.”“Yes, but several EVENTS must occur before they can fully evolve.”“Do you mean…?”“Yes, but only a single interaction may be necessary, if the asteroid is large enough,” the hive queen responded. “But this species will take eons to evolve and the selected dominant is so fragile,” the consort responded, examining the bubbles containing the seeds.The life bubbles contained the seeds for all selected species, vegetative, animalus, the tiny insects, and aquarians. “How will they be protected from the extinction prime?” the consort went on to ask. “They will not be alone. My hive will remain. And when imperative, a chosen will arise from among them,” the hive queen replied. The hive queen released the bubble from their side of the dimensional wall, into the newly evolving planet.“Cho