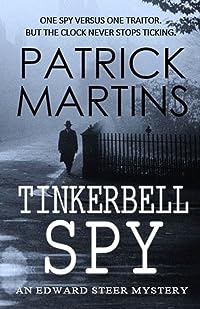 BOOK DESCRIPTION
Edward Steer is a man who thought he had experienced it all, until Tinkerbell arrived on the scene.

FROM THE BACK COVER
In 1964 the cold war is getting hotter with each passing day and the west is in turmoil. One person codenamed TINKERBELL has access to the west's spy rings an in exchange for asylum, is willing to leak them to the east.

The one hope is the esteemed Edward Steer; a ruthless, adversarial spy of twelve years standing and dulled by the monochrome life of the unseen. Recruited to find out just who Tinkerbell really is, but to do so means spying on the spies in a world where trust does not exist.

TINKERBELL SPY tells of the struggle between east and west where one hundred and eighty agents operating in Europe are at risk. Time is running out and Edward has to uncover the truth before the Russians uncover their spies.