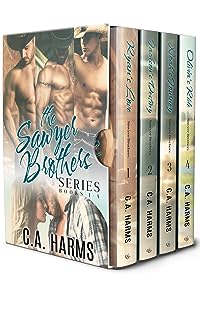 RYAN'S LOVE - BOOK #1One of the hardest things I have ever had to do was bury my wife. The second hardest thing would be watching my twelve-year-old daughter fall to her knees as they lowered her mother into the ground to rest. A heart-wrenching vision that will forever be etched in my mind.Claire was my best friend—she had been since we were barely old enough to talk. I always knew, one day, I would marry her. I think I may have even told her that a few times while we were growing up. Never did I think I would lose her so suddenly.I knew at that moment…Our life would never be the same again…JACKSON'S DESTINY - BOOK #2Shaken to his core, the loss was excruciating…Jackson Sawyer was strong, confident, cocky, and arrogant, but when he loved, he loved hard.The Sawyer family was faced with a tragedy that rocked their foundation. Jackson, however, was hit the hardest. He’s the one who can't seem to rise above the grief.It has overtaken him…Until he finds Bailey Whitmore. She also has a darkness she just can't shake. Yet she hides it well—tucking her sadness away, and shadowing it with a spunky attitude. But those demons have a way of showing up when you least expect it…Love is intense.Loss is inevitable.Pain and anger are unavoidable.Will they find the strength to rebuild their tainted hearts together? Or will it go against…Jackson’s Destiny?NOAH'S JOURNEY - BOOK #3The years that were taken can never be repaid.The memories stolen can never be returned.But I had to move forward…for him, my son.Noah had spent years wondering what he could have done differently. Wondering what he’d done wrong to make Stacey leave. The heartache from her absence and the what-ifs of their past eventually turned to anger—and then disgust.It took years for him to move on, and once he did, his past came thundering back, revealing a secret.A secret that would forever change his future.Alena had waited for the chance to have more with Noah. He was an enigma, a man of mystery, yet she wasn’t quite ready to give up on him. She knew there was more to him than what he allowed those around him to see. She was drawn to his charm and his calm nature. With an uprooted past of her own, she craved a little stability more than anything. But when things between them finally begin to grow into more, their relationship is tested.Will it all be too much for Alena to handle?Or will she decide to stay and be a part of…Noah’s Journey?OLIVIA'S RIDE - BOOK #4Keeton Pearce hadn’t lived a life full of supportive, loving family…In fact, it was just the opposite. He had been on his own for so long he had no idea what it felt like to belong. He didn’t want to rehash the life he left behind, or even think about it. But the hate from his father followed him, slowly eating away at the life he had begun to build for himself.Olivia Sawyer had been prepped on how to deal with the advances of those college men she would encounter… After all, she had been surrounded by three alpha men who made sure she knew just how to handle herself. But when she met Keeton Pearce, all those words of warning flew right out the window.For the first time she had nothing to say. She was caught up in those eyes and that dimple.The Sawyer attitude no longer gave her the ability to be immune.Neither of them counted on meeting each other. It was by chance, and no one expected that one moment would change their lives forever.For the first time in his life, Keeton had hope.He felt like he had found where he belonged. But would he survive the interrogation of an overprotective father and the watchful eyes of Jackson and Noah? Or would Keeton run for the hills, fearful of… the Sawyer Brothers?