Theodore Roosevelt: A Life From Beginning to End (Biographies of US Presidents Book 26) 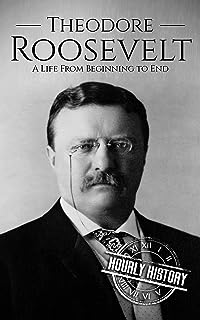 Theodore Roosevelt
There was truly no one like Theodore Roosevelt. From a sickly boy, Teddy (as the world came to know him) would transform himself into the apex of vigor and energy. From husband, father and rancher to hunter, governor and president of the United States, Theodore Roosevelt led a most extraordinary life.

Inside you will read about...
✓ Early Life & Education
✓ Early Political Career and Marriage
✓ The Old West and a New Beginning
✓ Early Public Life
✓ Becoming a National Figure
✓ Governor and Vice President
✓ Presidency
✓ Post-Presidency
✓ Election of 1912 and Final Years

This was a man who did many things and did them outstandingly well. Roosevelt's willingness to go the extra mile, to put fear in the back seat, were qualities that he saw in his beloved country as well. America is a better place for having known Theodore Roosevelt.