The Fight for Love 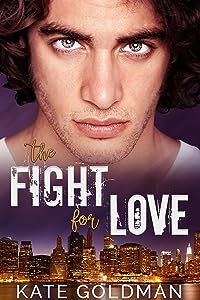 Journalist Lucie Walters lives in the city and works for The Standard newspaper. She’s living her dream until one night after working late she’s attacked by two thugs in a multi-story parking garage. But a hero shows up in the form of a hooded stranger who saves Lucie’s life. She quickly realizes that her savior is no stranger but famous fighter Dalton Hughes. Dalton gets injured in the ensuing melee when he saves Lucie but refuses hospital treatment, insisting that he can’t risk the negative press. He agrees to go back to Lucie’s apartment to let her dress his wounds and the chemistry between them is undeniable. Dalton is powerful with an edge of danger but he’s also kind and protective. Lucie can’t help but be drawn to him. But Dalton isn’t looking for a relationship. His sole focus in his life is his fighting career and he doesn’t have space for anything else. Yet Dalton and Lucie can’t stop being drawn to one another. Might Dalton be willing to fight for love? Can Lucie tame this famous fighter?