Purgatory is a Place Too (Not Quite Eden Book 5) 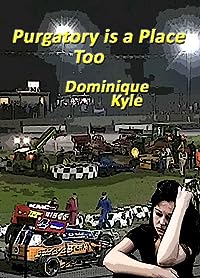 Sixteen year old Cody, Eve's new client for her Formula Two Stocks Induction business, begs Eve to help a friend of hers. Jessica tells a heart rending story of being groomed by a gang for underage sex and being trafficked to other towns for the same purpose. But when Eve approaches Jessica's mental health team, her social worker claims that Jessica is making it up to gain attention and is basing all her wild stories on research she's done on the internet into the recent Rotherham gang grooming scandal. No-one seems inclined to help Eve try to sort fact from fiction, not the local police, press or psychiatric services, so she is forced to do a deal with the team from ITV who used to work on the 'Thrills and Spills' documentary - if she and Quinn agree to do a short series with them, they will find her an investigative journalism team to help her go undercover to break open the secretive underworld that Jessica insists exist in their town.So with Quinn as back up, Eve sets about posing as a fourteen year old girl in the hopes that a gang member will take the bait. And since Jessica is claiming that the men are all of Pakistani origin, Eve is uncomfortably aware that if this turns out to be true it will tear the whole town apart and whatever the outcome Eve herself will probably be accused of being a racist. To defend herself from this, she recruits her young Muslim male contact, Sahmir, to go undercover with her, and they set out to disprove the claims that their home town is the hotbed of yet another shocking gang grooming abuse ring. Unfortunately she can't tell any of her friends and work colleagues about what she is up to and her increasingly odd behaviour is making them concerned. Add to this the pressures of a full Stocks calendar as she tries to gain both the National Points Championship and World Championship in the same year, and things were always bound to get out of control...(Based on some true events)