Into the Heart of Talis: Chronicles of Talis Prequel 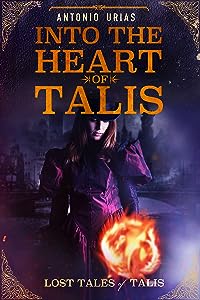 Two hundred years have passed since the Witches were driven from Talis. Two hundred years of bitterness and exile, but at last their time has come.Leonora has been training for this moment all her life, desperate to prove herself worthy. Magic and vengeance flow through her veins, but when her cabin is ransacked and she finds signs of sorcery, Leonora quickly realizes that someone onboard is not what they seem. There's the old riverboat captain who watches her, full of unasked questions, and an unrepentant conman who follows her everywhere with greed in his eyes.One of them knows her secret. One of them is hunting her.But when you hunt a witch, it is far more likely that she is hunting you.Into the Heart of Talis is a 20,000-word novella that takes place directly before Irons in the Fire.PRAISE FOR IRONS IN THE FIRE "An unashamed fantasy it has faeries and goblins, witches and imps…and the political intrigue of any court or historical drama." – Northern Witch's Book Blog"Politics dominates the multifaceted and character-driven story line, along with murders, magic and suspense...I'm thoroughly invested in the political chess game and intriguing schemes." - Reader's Favorite Review (Five Stars) The Chronicles of TalisPrequel: Into the Heart of TalisBook 1: Irons in the FireBook 2: The Fall of the House of Talis (Fall 2016)