James Madison: A Life From Beginning to End (Biographies of US Presidents Book 4) 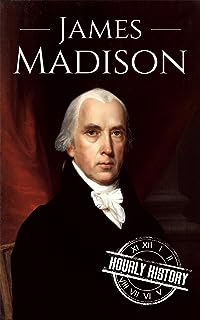 James Madison
There have been countless words written about the Founding Fathers. As the people who crafted the documents that would win Americans freedom from Great Britain and establish a constitutional republic, they were indeed a special group.
One of the most overlooked Founders is James Madison. His life was as extraordinary as the others, but for some reason, he doesn't often find himself in the popularity column.

Inside you will read about...
✓ Early Life
✓ Early Political Career
✓ Father of the Constitution
✓ The Federalist Papers
✓ Politician and Statesman
✓ President 1809-1817
✓ Personal Life
✓ Later Years

This ebook will introduce you to James Madison. Besides becoming the 4th president of the United States, he served in government for most of his life. You will meet him as he goes off to college, when he returns home to Montpelier, and when he decides to assist with the greatest achievement of his life, the writing of the U. S. Constitution.

James Madison was a man not to be forgotten. This ebook will prove to you why.