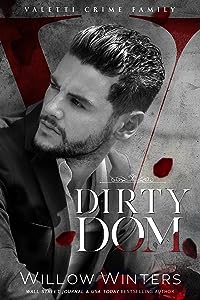 Dominic Valetti is only interested in two things: getting paid and getting laid.

He’s a bookie for the Valetti crime family, and he knows his sh*t. Dom’s busy doing business, no time to dabble in social niceties. The women that chase after him wanting more than a dirty, hard f*ck are only gonna get their hearts broken.

That is, until Becca stumbles into his office to pay off her ex’s debt. A hot brunette who’s just as guarded as he is and has a body made for sin… and for him. They’re not meant to be together. A woman like her shouldn’t be with a man like him. He’s mobbed up; she’s a good girl who deserves better.

When they push their boundaries and cave to temptation, they both forget about the danger. And that’s a mistake a man like Dom can’t afford. Will Dirty Dom risk it all to keep Becca safe, or will he live up to his name?

This is a standalone, full-length mafia romance with a filthy-mouthed, possessive bad boy. Guaranteed HEA.