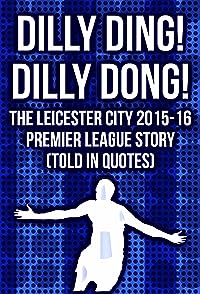 “We all know the big teams and the big money wins ninety nine percent of the time. I know, because I am the one percent.”

“Roy Of The Rovers readers would have written in and said, ‘No, this is too daft.'”

“I told them if you keep a clean sheet, I'll buy pizza for everybody. I think they're waiting for me to offer a hot dog too.”

“I don’t believe in miracles but this is as near as it gets.”

"It’s difficult for me to describe my emotions in Italian. Can you imagine in English!”

“The fans are dreaming. Keep dreaming. Why wake up?”

If pre-season someone had told you that Chelsea would fail to defend their title, and on the day when the new champions were officially confirmed, Chelsea fans would be chanting the name of the new champions, it would have seemed unbelievable…

From pizza to champagne, from Jamie Vardy having a party to Gary Lineker’s undies, this is the story of the most incredible season in the history of English football, told in quotes by the players, managers, pundits and fans.

Author’s/editor’s royalties from this book are donated to the Starlight Children’s Foundation, a charity which grants wishes to seriously and terminally ill children, and which entertains over half a million children every year in hospitals and hospices throughout the UK.

You can find out more about the Starlight Children’s Foundation at:
www.starlight.org.uk