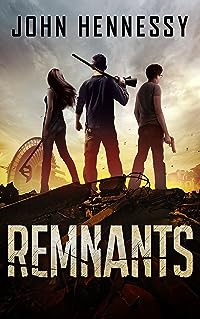 In a single heartbeat, the face of the world changes forever when virtually every living animal disappears without a trace.When high school senior Darrel Reid wakes up to find his home empty and the neighborhood eerily silent, with the same strange mark on every door, he’s more than a little shaken. Then an alien shows up in his backyard and his life spirals into a living nightmare. Reunited with his two best friends, Maggy and Félix, the trio makes for a natural disaster bunker on the outskirts of town, but a new mark draws them into a house, where they find an unconscious schoolmate—and a trap.Barely surviving the night, they set out in search of safety, only to discover a landscape that promises a gruesome death, as each passing day becomes more treacherous than the one before. But when Darrel is abducted, a much more sinister plot unfolds, one that leads to a single choice: Fight or go extinct.About Remnants:Set in a critically overpopulated near future, Remnants is told through two shifting points of view: Darrel, a 17-year-old gamer geek unprepared for the end of the world; and Maggy, a 16-year-old tech genius who wields a replica axe from Lord of the Rings. The pulse-pounding action of this apocalyptic YA thriller will appeal to fans of alien invasions, survival stories, and pure sci-fi adventure. Release Note: This second edition was published on August 30th, 2017.