A King Ensnared: A Historical Novel of Scotland (The Stewart Chronicle Book 1) 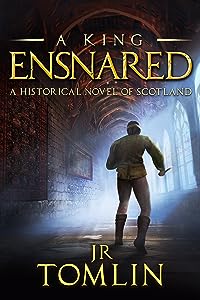 On the dangerous stage of medieval Scotland, one man--in an English dungeon--stands between the Scots and anarchy. Robert III, King of the Scots, is dead, and Scotland in 1406 is balanced on a knife's edge. As he eyes the throne, King Robert's ruthless half-brother, the Duke of Albany, has already murdered one prince and readies to kill young James Stewart, prince and heir to the crown. James flees Scotland and his murderous uncle. Captured and imprisoned by the English, he grows to be a man of contradictions, a poet yet a knight, a dreamer yet fiercely driven. Hardened by his years in the Tower of London and haunted by his brother's brutal murder, James is determined to find some way to recover his crown and end his uncle's misrule. But the only way may be to betray Scotland and everything he believes in.