The Consequences of Chaos: Syria s Humanitarian Crisis and the Failure to Protect (The Marshall Papers) 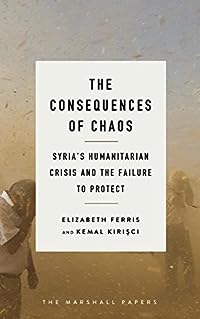 The massive dimensions of Syria's refugee crisis—and the search for solutionsThe civil war in Syria has forced some 10 million people—more than half the country's population—from their homes and communities, creating one of the largest human displacements since the end of World War II. Daily headlines testify to their plight, both within Syria and in the countries to which they have fled.The Consequences of Chaos looks beyond the ever-increasing numbers of Syria's uprooted to consider the long-term economic, political, and social implications of this massive movement of people. Neighboring countries hosting thousands or even millions of refugees, Western governments called upon to provide financial assistance and even new homes for the refugees, regional and international organizations struggling to cope with the demands for food and shelter—all have found the Syria crisis to be overwhelming in its challenges. And the challenges of finding solutions for those displaced by the conflict are likely to continue for years, perhaps even for decades.The Syrian displacement crisis raises fundamental questions about the relationship between action to resolve conflicts and humanitarian aid to assist the victims and demonstrates the limits of humanitarian response, even on a massive scale, to resolve political crises. The increasingly protracted nature of the crisis also raises the need for the international community to think beyond just relief assistance and adopt developmental policies to help refugees become productive members of their host communities.