e-Pedia: United States Presidential Election: The election of the President and Vice President of the United States is an indirect vote in which citizens ... ballots for a slate of members of the U.S 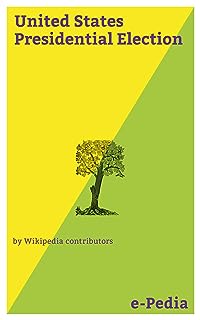 This carefully crafted ebook is formatted for your eReader with a functional and detailed table of contents.The election of the President and Vice President of the United States is an indirect vote in which citizens cast ballots for a set of members of the U.S. Electoral College. These electors then cast direct votes for the President and Vice President. If both votes result in an absolute majority, the election is over. If a majority of electors do not vote for President, the House of Representatives chooses the President; if a majority of electors do not vote for Vice President, the Senate votes. Presidential elections occur quadrennially on Election Day, which since 1845 has been the Tuesday after the first Monday in November, coinciding with the general elections of various other federal, state, and local races. The 2016 U.S. presidential election is scheduled for November 8.This book has been derived from Wikipedia: it contains the entire text of the title Wikipedia article + the entire text of all the 467 related (linked) Wikipedia articles to the title article. This book does not contain illustrations.e-Pedia (an imprint of e-artnow) charges for the convenience service of formatting these e-books for your eReader. We donate a part of our net income after taxes to the Wikimedia Foundation from the sales of all books based on Wikipedia content.