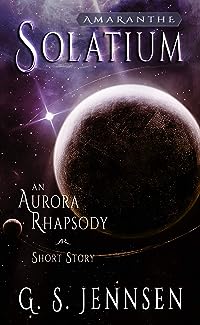 Morality could not be spawned by tweaking a few genes or shutting off a few neurons. Though humanity conquered the very stars, it remained unable to conquer the darkness within.In the dark, seedy underbelly of Pandora--a lawless colony on the best of days--a young woman who's lost everything but her soul fights to reclaim her life from a violent, sadistic criminal despot. But when she's given a chance for freedom, she realizes escape is not enough. First, a just punishment must be exacted for crimes committed.Set twelve years before STARSHINE: Aurora Rising Book One (Aurora Rhapsody #1), SOLATIUM is Mia Requelme's origin story--and the story of how she and Caleb Marano met. It's a story about criminals and those who punish them, but mostly it's a story about the struggle to keep hold of one's soul in the face of so much darkness.*SOLATIUM was originally published in Crime & Punishment: amzn.com/B018Z4GYC0