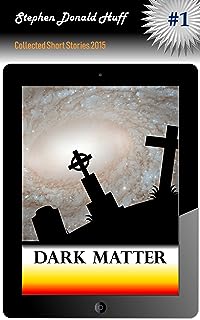 The title of this collection of twenty-one provocative short stories reflects the dark matter within us all, for we are all made of star stuff and the cosmos turns on dark matter of unknown origins. Explore the horror of contemporary darkness when you read “Ogre”, “Cassandra’s Cat”, “Redemption”, “King Charlemagne Ebersol”, “Perverse”, “Dorry’s Dilemma”, and “Poop Love”. Apocalyptic visions are, by nature, dark experiences, as you will enjoy in “Radiance and the Lingering”, “Maxim One”, and “Reaper”. Confront darkly dystopian futures in “All My Befores and Afters”, “Mate”, and “Veer”. Voyage into surreal shadow within “Never the Twain Shall Meet”, “A Clockworks Harlequin”, “The Forever Man”, “In Lividity of Dreams”, “Pyatak”, "Clandestine Incandescence", and “Eleven”. Celebrate shades of history in “Semper Fidelis”.

Radiance and the Lingering: When a powerful, unavoidable cosmic apocalypse irradiated the entire planet, every living creature succumbed. Yet, all were spared a natural death. Why?

Never the Twain Shall Meet: How far does our mirror's reflection imitate reality? If we could crossover to the other side, what might happen when in the twain we and our reflections meet?

Mate: “Project Ogre” is the most powerful information-gathering computer system ever constructed for the U.S. government, and it is being run by a sociopath. How far will he go to escape justice?

Mate: The bloodiest conflict in history was in an endless state of stalemate. Only a mad genius could save humankind from itself, but the price for victory might be too high to pay.

Maxim One: His maxims keep him alive in a world of harm, no matter the cost or the consequence to those around him. Then she comes along.

Veer: The editor of this tale is the last standing Veer, the lone survivor of a time war devastating humankind's future, and she needs your help today!"

Semper Fidelis: During the bloody throes of combat, all is fair and the only rules that apply are those that promote survival. In the face of evil, what is the nature of right and wrong?

Cassandra’s Cat: Who killed Cassandra's cat? And why?

Pyatak: Something ancient and evil has alighted in Pyatak. A mysterious entity, it is both vicious and insatiable. No one is safe.

Redemption: In a gritty, existential world rife with threats, a young boy fights to survive. One man has the power to save him.

A Clockworks Harlequin: No need to wind it. It doesn't require batteries. This life-size clown runs on the power of black magic!

King Charlemagne Ebersol: Due to past scandals, the local high school plays under court-ordered supervision. How far will they go to recruit the King of youth football?

Perverse: All My Befores and Afters: Waging a genocidal war through time and space, can he preserve his sanity long enough to free his people?

Reaper: He has been biologically engineered to do one thing: fight for the survival of his people. Can one Reaper make a difference?

In Lividity of Dreams: Countless nameless people populate our dreams. Who are they? What becomes of them when we lay violent hands upon them in lividity of dreams?

Dorry’s Dilemma: Young Dorry loves the fourteen year-old boy next door, but his abusive father is an endless distraction. She'll do anything to save him.

Poop Love: Is theirs a match made in heaven or hell? Can he survive her preschool son's animosity to prove his love for them both?