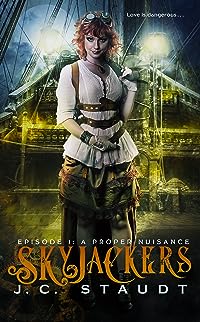 Vivian Caine is the eldest daughter of the most notorious airship pirate in the world. Her swashbuckling family has enjoyed a long and lucrative reign of terror over the people of Esperon.

That reign will soon come to an end, if fresh-faced Captain Jonathan Thorpe has anything to say about it. A recent graduate of the Sky Marshal Academy, Thorpe is determined to uphold the law where his colleagues have failed.

There's one thing neither Vivian nor Jonathan had bargained for, however: a rivalry steeped in attraction. Vivian soon finds herself fighting to keep her dysfunctional family from harm, even while battling her feelings for the smitten young marshal. Can Vivian and Jonathan pursue their passions while honoring their principles?

Skyjackers is a steampunk adventure-romance serial containing six episodes. New episodes will be available each week. Kindle Unlimited subscribers may read the story in its entirety for free.

The Complete First Season will be available in May 2016.