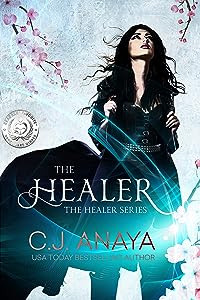 A girl, a prophecy, and two warring gods equals destiny!

Hope Fairmont longs for a normal teenage life, but with a gift like hers, normal equals healing illnesses and injuries instantly. Keeping a secret like that isn’t easy, but a small town is the perfect place for her to heal those who can’t heal themselves, and an even better place for her father, James Fairmont, to hide his daughter from the rest of the world.

Life takes an unexpected turn when two handsome strangers move into town and begin unearthing other secrets concerning Hope's future and past, revealing to Hope that her gift for healing may be the fulfillment of an ancient, Japanese prophecy gone wrong.

Staying away from these mysterious newcomers would be the smart thing to do, but Victor's gentle, easy manner, and Tie's mixed signals and strange mood swings draw her hopelessly closer to revealing the secret she and her father have been so desperate to hide.

Hope's life is complicated further with visions of a previous life and the arrival of a supernatural demon sent to assassinate her before she learns what she is truly capable of.

With the support of her father, the fiery loyalty of her best friend Angie, and the child-like love of Kirby, a ten-year-old patient, Hope must fight against the forces of a relentless demon god while unwinding the tangled pieces of her past, proving to herself and those she loves that destiny isn’t determined by some cosmic reading of the stars, but by the individual choices one makes.

Embark upon a journey of heart-stopping adventure in this young adult paranormal fantasy filled with supernatural creatures, ancient prophecies, immortal gods, and divine magical healing powers. A romantic coming of age series filled with love, loss, and second chances. This romantic adventure infuses fantasy, swords and sorcery, traditional myths and legends, and paranormal themes to create a thrilling story readers are sure to enjoy.
**********
Excerpt:

Tie shook his head and opened his mouth as if to say something, but all that came out was a wheezing noise and then an alarming amount of blood. I looked at the gaping hole in his chest and began to panic, feeling certain Tie should have repaired what he could, and Victor should have been able to heal him by now.

“Victor, why isn’t he healing himself?” I asked anxiously.

Victor opened his eyes and sat back looking defeated.

“Then you do it,” I cried out. My voice was beginning to shake. I was about two seconds away from becoming as unhinged as Angie.

“Nothing can be done, okay?” The look he gave me was awful. A look of defeat. “There is absolutely nothing that anyone can do. The sword that stabbed him was forged in the land of the dead, and I only have so much power at my disposal. What little power I did have, I used to heal you when we were at the hospital.”

I swallowed down the lump of guilt forming in my throat and let out a trembling breath.

“Even if I hadn’t healed you tonight, I still wouldn’t be able to help him. You can’t heal a stab wound inflicted by that kind of sword,” he whispered. “Tie is going to die.”
****
Kindle Categories