Men from Newcastle: The World Wars of Ted and George Murray (Their World War Book 6) 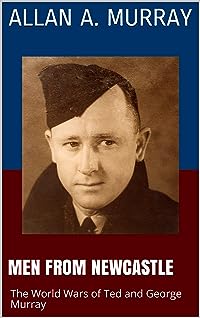 by Allan A. Murray

Newcastle is the second city of New South Wales, 200 km north of Sydney. This book records service stories of men from Newcastle: three generations from the one family.

The stories depict service in the Royal Australian Navy and Air Force, the Australian Army and the Australian Merchant Navy and demonstrate considerable diversity; from front-line fighters to cooks and aircraft mechanics.

Notable facts of these men from Newcastle:
Three served on the Western Front in the Great War.
William ‘Willy’ Thompson was at the tragic Great War battle of Fromelles and also at the magnificent feat at Amiens – Germany’s ‘Black Day’.
Robert Hughes was killed in the Great War at that most poignant of places – Hill 60.
George Anderson survived the sinking of the first merchant ship by Japanese submarines off the south-east coast of Australia in 1942.
Three crossed paths with the Japanese submarine I-21.
Arthur ‘Dukesy’ Forbes witnessed the sinking of SS Iron Knight and the loss of 36 merchant seamen, many from Newcastle.
Robert ‘Bobby’ Forbes served on HMAS Australia, the Royal Australian Navy’s premier warship in World War II.
Two were Called-up for National Service: one in the 1950s the other in the 1960s.

These are great stories about service life – at war and at home – that also tell the story of the contribution to Australia's military history of an extended family of Novocastrians.