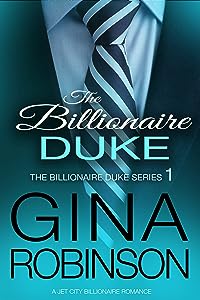 Once a duke's enough...SEATTLE'S SECOND HOTTEST BILLIONAIRE JUST GOT HOTTERAmerican billionaire and Flashionista cofounder Riggins Feldhem's life is exactly the way he likes it. Until a visit from a British solicitor turns everything upside down. Riggins has just inherited a dukedom complete with a large British estate, an aristocratic title, and the obligation to marry and produce an heir. With a woman his predecessor, the Dead Duke, has selected for him. A woman who uncomfortably stirs his jaded heart. But no one is going to force him into marriage. There has to be a way out of this mess.Haley Hamilton is young, just out of college, and looking for a hero. Riggins could give her everything. Or completely break her heart. She doesn't want to be anyone's forced duchess. But the Dead Duke and Riggins' irresistible charm are making it impossible to resist.The first book of the page-turning romantic comedy readers have been waiting for!Continue in the exciting and romantic world of the Jet City Billionaires…The Billionaire Duke SeriesNOTE: These novels must be read in the order listed below.1-The Billionaire Duke2-The Duchess Contest3-The Temporary Duchess4-The American Heir>>>Romantic Comedy>>>New Adult Contemporary Romance>>>Contemporary Romance>>>Women's Fiction Humorous>>>Billionaire RomanceThe Jet City Billionaires world presents romantic stories full of humor, laughs, secrets, mysteries, and poignancy. The Billionaire Duke series follows the story of Riggins and Haley in a modern twist on the classic marriage of convenience story. Scroll up and grab a copy today!