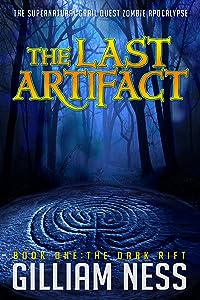 When they come into possession of a mysterious prehistoric cube, relic hunter Gabriel Parker, and the alluring artifact historian Natasha Rossi, find themselves inexplicably bound to a dark mythology dating back to the roots of civilization. Throughout history the long lost Cube has been sought after by emperors, popes, and caliphs alike. It is believed to be a container of knowledge; a holy vessel capable of emancipating humanity from the confines of earthly mortality. Now that it has been found, demonic forces are surfacing to destroy it. Their presence marks the return of a potent nefarious entity that once reigned supreme in Earth’s distant reptilian past.

Under the apocalyptic shadow of global unrest and rampant natural disasters, Gabriel and Natasha battle to prevent this sinister blight from being unleashed. With nothing but a tattered journal to guide them, they race from Italy to Morocco, and finally to the mountains of Northern Spain where they must locate a Lost Labyrinth spoken of by the ancients. There, deep in a Sacred Chamber, they will find salvation for mankind, but not without a price. A cosmic clock is ticking. It marks the world’s entry into the oblivion of the Dark Rift, and the final days that remain.