Botswana Essays: Four Decades of Immersion in an African Culture 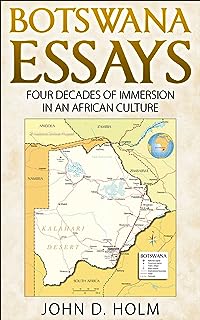 This collection of essays critically examines common perceptions the developed world has about Africa. The author, using his experience of living and working in Botswana and, to a lesser degree in other African countries, argues for a more nuanced portrayal of the dynamics of significant forms of African social interaction. In metaphoric terms, his intention is to take the charming images of Botswana presented by McCall Smith in his The No.1 Ladies Detective Agency novels and add to these images a more balanced structure and meaning—combining the enchanting and amusing with the troubling and confounding.

The essays are intended for two audiences. One is citizens of Botswana and students of the country who are interested in reflecting on the extent to which rapid modernization since independence has transformed social relations. The other audience is readers intent on obtaining a keener sense of ways a modernizing African society is different from the developed world. This latter group includes students and travelers who want to consider some underlying forces they may observe with a sustained immersion in a developing country, and particularly Botswana.

The discussion in each essay is founded largely on experiences the author has had in a wide range of contexts. He seeks to weave these experiences into one or more generalizations about the way in which Botswana society works in a particular environment. In the process he raises questions about prevailing perceptions that the developed world has of less-developed countries. He admits in the course of most essays to have himself once held some version of these developed-world misperceptions.

The topics covered are ones which are highly contested in both public and private discussions within Botswana. The specific focus of the various essays are as follows:

The author is a PhD-trained political scientist. He began field research in Botswana in 1970. He returned regularly for the next thirty-five years for varying periods of time, the longest of which was 14 months. As a researcher in these years he traveled over most of the country and met a wide range of the citizenry from top executives to hunter-gatherers on the Kalahari. Beginning in January of 2006, he served for four years as the first Director of International Programs at the University of Botswana. In this position he was able to observe the internal dynamics of a major social institution as well as the misconceptions of visiting students and scholars. In the course of his career, the author has also visited many other African countries and engaged in field projects in Ghana, Nigeria, Lesotho, and Zambia. However, Botswana is his second home.