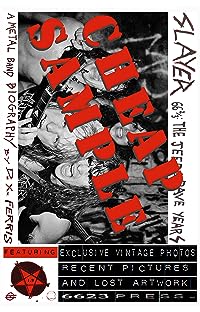 The exhaustively researched rock bio "Slayer 66 & 2/3: The Jeff and Dave Years..." answers burning questions, shatters popular myths, and uncovers new truths about Slayer in 59 chapters, 400 endnotes and three appendices (in the Kindle edition; two in the paperback). The innovatively designed e-book features extensive links to a host of [non-copyrighted] material.

This sample contains six of the book's 59 chapters, some photos, and some background information. The chapters cover some formative days, classic ’80s episodes, and events from recent years. If you like them, please check out the rest of the book. It’s cheap — a mere $6.66 for the e-book, $16.66 for the paperback (which runs 320 pages, 6x9”).

Author D.X. Ferris previously wrote the first English-language book about Slayer, the longrunning, Grammy-winning thrash band that stands as the living embodiment of heavy metal. The timely "Slayer 66 2/3: The Jeff & Dave Years..." is the rest of the story. So far. It’s a prequel, sequel, update, and companion piece. This book is completely distinct from the other one.