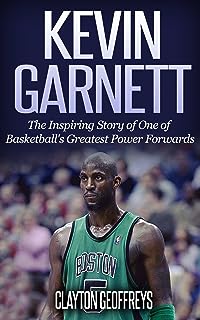 Learn the Incredible Story of the Minnesota Timberwolves' Basketball Legend Kevin Garnett!
Read on your PC, Mac, smartphone, tablet or Kindle device!
In Kevin Garnett: The Inspiring Story of One of Basketball's Greatest Power Forwards, you will learn the inspirational story of one of basketball's premier power forwards, Kevin Garnett. Since joining the NBA directly from high school, Kevin Garnett has had a highly productive and legendary career in the NBA as a leader and as a basketball player. From leading the Minnesota Timberwolves in the early 2000s to playing an important role as part of the Boston Big 3 alongside Paul Pierce and Ray Allen in their deep playoff runs (including a 2008 NBA Championship), Kevin Garnett is easily one of the greatest power forwards to play the game.
It is hard to believe that we have had the unique opportunity of seeing a young teen mature into a man throughout his NBA career.
While Kevin Garnett is nearing the twilight of his career and has openly accepted the role as a mentor for young bigs such as Karl-Anthony Towns, his legacy on the game of basketball will never be forgotten. After all, anything is possible.
Here is a preview of what is inside this book:

An excerpt from the book:
No single person in the history of the NBA has been as fiery in both ends of the court as Kevin Garnett. Aside from his lone championship, individual accolades, numerous All-Star game appearances, and career milestones, Kevin Garnett (or KG as he is better known) is intensity personified on the basketball court. Whether as a teammate or as a player on the opposing side, KG will always push you to your limit in any manner conceivable and will get into your head both on and off the court. He pushes people so hard that he once made his Boston Celtics teammate Glen “Big Baby” Davis cry during a televised game by scolding him on the sidelines after a timeout. Moreover, opposing players tend to get the worst aspects of his intensity as he is a very physical player and is one of the best trash-talkers in the game. He once called opposing forward Charlie Villanueva a “cancer on the team” while defending him. KG has even gone as far as insulting All-Star Carmelo Anthony’s wife in a game.
However, it is also KG’s intense persona that contributed to his legendary and accomplished career. He is a 15-time NBA All-Star, a one-time MVP, a one-time Defensive Player of the Year, an Olympic gold medalist, an All-NBA team member nine times, a 12-time All-Defense team member (tied with Kobe Bryant for second of all-time), and above all an NBA champion. He is also today’s longest tenured NBA player as he has been with the league since the 1995 season.