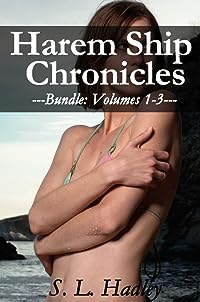 Harem Ship Chronicles is a collection of three rough, steamy tales, following the strict Capt. James Davison across the galaxy and under the sheets. With a ship full of vivacious alien women, and light-years to travel, James has plenty of time on his hands. You know, for science.This bundle contains Volumes 1-3:Volume 1 (Punishment): Capt. James Davison spends his time with a wild, little alien named Orryhena. Part human, part demon, part cat-girl, and 100% nymphomaniac, she's quite the handful. But when Orryhena can't follow a simple order, James decides it's time for a spanking to remind her who is in charge. It's a Space Captain's job to enforce discipline and reward obedience, after all. Volume 2 (Dominance): Capt. James Davison spends his time with a rough, masochistic beauty named Sasha. Part human, part dragon, part submissive, and 100% ferocious, she likes to know exactly who is in charge. But when Sasha decides she'd rather run things in the bedroom, James has to step up and wield a bit of martial law. Sometimes, even a Space Captain has to use the back door. Volume 3 (Persuasion): After a black market deal goes awry, Capt. James has more than a little pent-up frustration. And when he discovers a sexy, foul-mouthed stowaway named Kitty, he decides it's time to teach her a lesson in respect. (With the help of Diana, an accommodating lover fresh from the Pantheon, of course!) Together, James and Diana unleash some tough love on the headstrong concubine-to-be. Unfortunately for Kitty, she may have bitten off a bit more than she can chew. Or swallow.