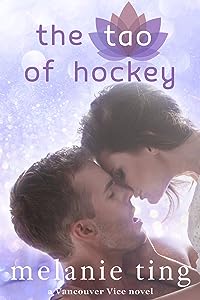 After being selected in the first-round of the NHL draft, Eric Fairburn was in a car accident that destroyed his career. Now, five years later, he’s getting one last chance. If he can make the Vancouver Vice of the AHL, it could be the first step to making his hockey dreams come true. There are only two things standing in his way—the coach from hell and his own self-destructive ways.

The one talent he hasn’t lost is his way with women. So he’s surprised to be turned down by a mysterious woman he meets in a bar. Eric finds himself pursuing her when he should be focusing on hockey. Yet he’s drawn to her confidence and independence, believing that might be the key to fixing his own on-ice issues.

This book contains adult situations and language and is suitable for readers aged 18 and up. The Tao of Hockey is the first book in a new series about a fictional hockey team called the Vancouver Vice.