Wreck of the Whale Ship Essex - Illustrated - NARRATIVE OF THE MOST EXTRAORDINARY AND DISTRESSING SHIPWRECK OF THE WHALE-SHIP ESSEX: Original News Stories of Whale Attacks & Cannibals 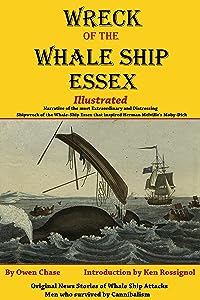 In one of the most spellbinding accounts of men who go down to the sea in ships, the modern reader is given a seat in the whale boat of Owen Chase as he and his fellow crew and their Captain make way in three boats after the wreckage of the Whaleship Essex.
The account of how the Essex was wrecked inspired the infamous book Moby Dick and countless movies, including the newest, In the Heart of the Sea.
The perils of sea, storms, nefarious intent of evil men and fate combined to bring an end to a long whaling voyage – typically hard and grueling enough without suffering an attack by a furious and vengeful sperm whale.
The story, told in a first-person narrative by Owen Chase, the first mate of the Essex, was first published in 1821 and served to inspire Herman Melville to write his fictional book of the attack by the whale.
The perseverance and determination of the crew, mate, and captain to use each and every tool and morsel available to them in salvage from the wrecked Essex to outfit their flimsy whaleboats for a voyage of more than 2,500 miles back to the South American coast is remarkable in many ways.
Every ounce of energy and civility rapidly evaporated after two months at sea. The story not told by Melville may be the best part though the attack by the whale is still impressive if one imagines being on the small ship as the leviathan repeatedly bashes in the hull.
In addition to the stirring account by Owen Chase are parts of the account by cabin boy Thomas Nickerson.
Nickerson returned to the seas on whale ships following the Essex shipwreck, one of just a few known to have been sunk by a whale. After he retired to running a boarding house in Nantucket was when Nickerson finally wrote his account of the Essex and the plight of the crew. Nickerson only put pen to paper when challenged by a visiting author.
When the writer, Leon Lewis, escaping from his creditors, became acquainted with Nickerson, he encouraged him to write down his tale of the incredible Shipwreck of the Whaleship Essex. Nickerson did so and entrusted the manuscript to the erstwhile writer who promised to get it published and then fled to England.
Over one hundred years later the Nickerson account The Loss of the Ship "Essex" Sunk by a Whale and the Ordeal of the Crew in Open Boats; was discovered in an old trunk and authenticated by the Nantucket Historical Association and published in 1984, a century after Nickerson wrote it.
Nickerson’s story told of the incredible attack on the Essex while two of the whaleboats were in the hunt to harpoon their prey. The first attack crashed the vessel and rocked it hard. Then, Nickerson wrote that the monster whale turned and rammed the Essex again, causing it to heave, break apart and sink.
The crew began their search for land and eventually found a small island that was rather poor in resources. The sailors, with the exception of three men who decided to stay on the island, left in search of a better island, the mainland or perhaps a ship.
Chase described how during the 90-day journey to the coast of Chile, the men were forced to eat one of their fellow sailors who had died. Nickerson was less than specific about the act of cannibalism and was on the same whaling boat with Chase. The other boat commanded by Capt. Pollard had, but four men left alive and too weak to continue. Finally, they decided to draw lots to determine who would have to be shot so that the others could live. The young cousin of the captain was the loser in that drawing and was killed. Only eight of the crew of twenty survived.
It was later revealed that the three men who stayed behind on the island were rescued, and two of the boats made it to Chile. The tale that they told, mainly through Chase’s account, laid the basis for one of the greatest sea stories ever in print or the movies – Moby Dick.
This account by Chase includes actual news coverage of whale attacks and cannibals.