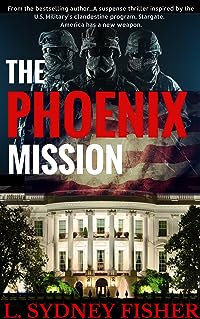 Meet Sergeant Major Seth Phoenix who has spent his entire life guarding his extraordinary "gifts" until Memorial Day, 1995 when a terrorist attack at Fort Bragg threatens the lives of himself and two of his closest friends. Seth risks it all when he uses his supernatural powers of telekinesis to save their lives, but General Douglas Monroe, the Deputy Commanding Officer of the U. S. Army Special Operations Command witnesses the event and has Phoenix transported to Fort Meade where the sergeant is introduced to the clandestine Stargate Program. Phoenix becomes one of America's most guarded weapons until a mole on the inside leaks information to Russia who has had their own psychic spy program for years. And the stakes continue to rise as the CIA and the FBI realize Phoenix may be the only hope in stopping one of the biggest Al Qaeda terrorist plots in history. As the United States' top remote viewer, Seth Phoenix must now find a spy and provide Intel and supernatural force to stop Al Qaeda before they are able to launch a global coordinated attack. How can Sergeant Major Seth Phoenix maintain his loyalty to his country when he knows that a congressional committee has already planned a hearing to discuss a means of protection against him?

Explore the fascinating paranormal research once conducted through the U.S. Military's top secret program and get to know Sergeant Major Seth Phoenix. Within these pages, you will find historical fiction traced with a little science fiction and a dose of reality. You choose what's real and what isn't as you meet some of the characters who actually lived during the Stargate Program's operation. Just remember, in the end and under direct orders of the CIA...this never happened.