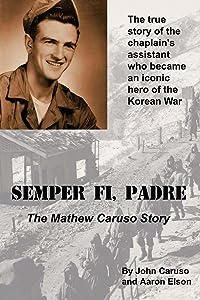 During the epic breakout from the Chosin Reservoir, Marine Sgt. Mathew Caruso, assigned as a chaplain's assistant, heroically saved the life of Chaplain Cornelius "Connie" Griffin at the cost of his own life. on December 6, 1950. Six days later, in New England, Mathew's son was born. Fourteen months after that, his father's Silver Star was presented to little Danny Caruso in a ceremony that made national headlines. In 1953 the Caruso Memorial Chapel was dedicated at Camp Pendleton. Two years after that, Mathew's remains were repatriated and his brother John, himself a Marine, served as his burial escort by train from San Francisco to Hartford, Connecticut. "Semper Fi, Padre" is a story of sacrifice and heroism, but it is also about the effect a death in combat, any death in combat, can have on the lives of many people.