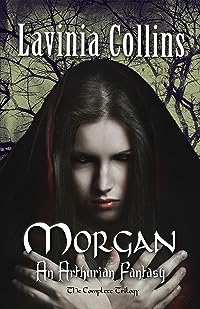 “An epic fantasy and a captivating new take on Arthurian legend.”
“A brilliant story, as good as Collins’ Guinevere trilogy, impossible to put down.”

Beautiful, mysterious and beguiling, Morgan, the half-sister of King Arthur, has come of age and left Avalon for Camelot. But she quickly finds that there are few people she can trust. Her brother’s only interest in her is as a pawn to sell into marriage to appease his enemies. And she can never really trust Merlin and follow his advice. With war on the horizon will Morgan take the opportunity to stand up for herself and even exact revenge on Arthur?

How far is she willing to go in her quest for freedom?

In a tale wrought with medieval romance, jealousy and revenge, Morgan will have to overcome the trickery of Merlin, the allure of Lancelot, the ruthless power of King Arthur, and summon all of her Otherworld powers if she hopes to survive a male-dominated court and vanquish her enemies.

THIS VOLUME COMPRISES ALL THREE BOOKS IN THE MORGAN TRILOGY

The Witches of Avalon
Morgan, the elder half-sister of newly crowned King Arthur, is on her way to becoming an accomplished witch. She learns quickly and soon makes a name for herself in Camelot. Yet with war on the horizon, she puts more trust in her magic books and the sword Excalibur than in the people around her.

The Curse of Excalibur
King Arthur’s power hangs on the brink as his half-sister Morgan reaps her revenge, and his illegitimate son Mordred battles against him.

A tale of love, jealousy, passion and loss that is steeped in folk lore and legend but written for contemporary women.

The Fall of Camelot
Sold into marriage to please King Arthur, his half-sister Morgan develops a bitter hatred of all those around her. Drawing on her magical powers, she seizes Excalibur and, wielding its power, threatens to bring down the kingdom.

A captivating story of medieval romance, jealousy and revenge.

If you like Game of Thrones you’ll love this epic Arthurian trilogy about the fate of Morgan, half-sister of King Arthur.

Lavinia Collins is the author of the GUINEVERE trilogy, also available on Kindle and in paperback. Her third trilogy MORGAWSE is soon to be published.