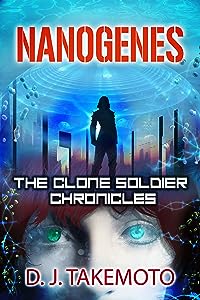 About The Clone Soldier Chronicles and the Author
The central theme of The Clone Soldier Chronicles is…will normal humans become extinct? Will scientists be able to extend life, fix genetic defects, and make perfect humans, and, will they still be humans? The answer is mostly yes, but some no’s. We will still be mostly human, but unless we stop the progress of Econo-medicine, there will be levels of humans; there will be those who can and cannot afford the fix. We already see that now…individuals in third world countries are blind from cataracts, while we can afford the fix. And in first world countries, some go blind from macular degeneration while others can afford the biologicals. And now scientists can change our genes.
This is the central theme of The Clone Soldier Chronicles…will we still be human? It follows the history of a single family in their progression from normal human to a new species.
The first book, Epigenes begins in current times, with a flu pandemic, structuring of economic zones, and rationing of medicines. It is during that time that humans become epigenetically modified. That’s when your DNA becomes modified from your environment, including from what you eat. Those with access to enough medicines and foods become different from the rest of the population. (Available on Kindle)
In book two, a class of super scientists emerges, the Gene Designers, those licensed to modify and clone humans. They want super athletes for The Clone Games. The rulers know they can control the situation…keep those clones from escaping. That is, until Dina infiltrates their complex and escapes with Dorian, their half-human super computer. (Available on Kindle).
Book three, is entitled Gene Drifters. That is the process of genetic drift; it is the change in DNA which can occur from contact with life, or in the next generation. It is what takes, becomes permanent enough to be part of an altered order. And the planet is vastly changed by global warming by the time we get to book three. (Available on Kindle).
Book four deals with what will happen when all those nanoparticles get out into the environment. In Nanogenes, the bacteria inside some nanoparticles do get out, altering both humans and the planet. (Available on Kindle).
Book five describes a newly emerging human population, those that can bridge the gap between the various mutant species by inserting large gene segments into their DNA; these are the Gene Jumpers.
Book six, Babel Genes, occurs in the distant future. I don’t want to say too much, but when so many different subspecies of humans exist on one planet…well, we could have a genetic Tower of Babel.
I am a Professor of Biochemistry. My area of research is in the eye, hence the eye on all six of the Clone Soldier Chronicles covers. For over 32 years in the lab, I have watched the change in the human species…some from my own research into the delivery of enzymes into the human eye using nanoparticles (http://www.k-state.edu/bmb/department/directory/takemoto/index).
I attended Ball State University, receiving my BS in 1971 in Biology. I learned skiing, backpacking, Microbiology, and Chemistry, in random order, at Colorado State University, obtaining the MS in Microbiology in 1973. But California called me home…we Californians are not unlike salmon. I attended the University of Southern California, receiving a PhD in Molecular Biology in 1979. I accepted an offer as faculty in Biochemistry, back in the Midwest again, and away from my home. But, the salmon instincts took over once more, and in 2011, I retired and returned home to California. I do miss my lab, but find that I can do much more cutting edge research at my computer, in my novels, and in a global warming future. Plus, I’m not constrained by those nasty experimental results…virtual data are so much easier to obtain.
You can find out more about The Clone Soldier Chronicles on Facebook: https://www.facebook.com/The-Clone-Soldier-Chronicles-897172786970