Tutankhamun and the Daughter of the Moon 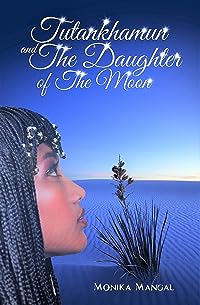 Pharaonic Egypt at the height of her power forms the magnificent backdrop for the story of Tutankhamun's short but eventful life, told from an unique perspective.

Egypt in the late fourteenth century BC: Ten-year-old Tutankhaten has just been crowned king of the Two Lands. His people pin high hopes on him, but with the kingship he hasn't asked for comes the total loss of his personal freedom. Worse still, it drives a wedge between him and Sitiah, the young daughter of Huy, his newly appointed King's Son of Kush. In order to carry out his duties, Huy moves to the far land of Nubia, accompanied by his family.
In spite of the huge distance that lies between them and their inability to get in touch with each other, the two young people refuse to give up hope. The hope that some time, somehow they might get together all the same.
The years go by, and everything seems to have conspired against them. Sitiah's mother does all she can to keep her daughter away from the royal court. Other women enter the life of Tutankhamun, as he is now called, foremost of all his Great Royal Wife, Ankhesenamun. Sitiah soon begins to fear that he may have forgotten all about her.
Meanwhile, the young king unwaveringly goes his way which is riddled with death and bitter disappointments. He sets to restoring the temples and their priesthoods throughout the Two Lands, and fighting the widespread corruption and abuse of authority among his officials. His efforts are unshakably supported by his closest advisers, but he can count his true friends on one hand. The royal court is teeming with scheming courtiers, among them unscrupulous individuals who secretly strive for the ultimate power.
Unrest in Nubia and tensions in the northern territories of the empire call for swift military action. Tutankhamun is determined to accompany his troops and lead them into battle. All the while he can't fight the feeling that his own personal quest for happiness isn't over yet...