The Omega Children - The Return of the Marauders: An Action Adventure Mystery 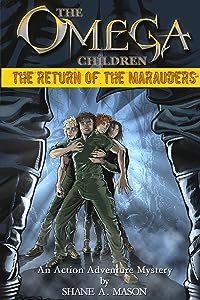 by Shane A. Mason

Melaleuca (pronounced “mel – la – luke – ka’) is a serious minded girl with spot-on gut instincts – always making the right decision. It drives her cousin Lexington batty as Lexington needs facts, lives in her mind and will not do anything without knowing why. Ari loves to roam the land and often says he can feel it inside him, and Quixote lives to annoy them all with his constant jokes and pranks much to the disapproval of Lexington.

When their peaceful valley is attacked one night by a horde of unknown men, the cousins are rescued and sent on a torturous argumentative journey to the remote land of their parent’s birth – a veiled land hidden at the bottom of the world.

An ancient civilisation, its roots lost to the whispers of time, steeped in brutal rites and dogma, flourishes there and only the strong survive and the weak are cast out.

Melaleuca is put in charge and given the preposterous task of uniting her cousin’s to fight and free the oppressed, though when they find a room full of thousands of unexplained costumes that give them power to follow their wildest dreams, pandemonium follows.

With danger and the threat of death around every corner Melaleuca begins to understand why she was told to trust herself more than she ever has, after all how can four stand against thousands?

With incomprehensible events set in motion from ancient times, myriad deep mysteries lie in wait at every turn embroiling them in escapades out of their control.