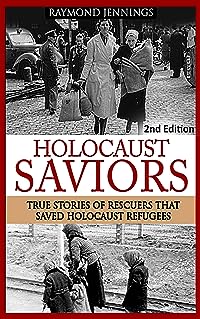 Candles In The Dark: The Holocaust Saviors and Their Stories - now in paperback!

When we hear the word “holocaust”, we immediately remember the dark days, the blood, the people, and the pain that no words can express. This huge event, so daunting as it can be, left a mark in the lives of the people who have experienced it and even those who have only heard of it.

The Nazis, not only brought destruction, but they brought an unforgettable scar amongst the human race. At those times, the victims would have called for a savior, someone who could literally take them out from the hell they were living in.

Holocaust Saviors: True Stories Of Rescuers That Save Holocaust Refugees is a book that talks about those heroes. They were ordinary people who also tasted the face of death but didn’t crumble. Despite the sight of fear, these brave hearts not only survived, but they helped others survive as well.

In This Book, You Will Learn About The Lives Of:

• Maria Kotarba
- A courier with the Polish resistance whose goal was to help the Jews after they had been exterminated.

• Adelaide Hautval
- The French female Physician eager to protect the Jewish people being subjected to Nazi experimentation and torture.

• Varian Fry
- The American journalist who started the Emergency Rescue Committee, that made a way for Jewish people trying to leave the Nazi territory.

Three women, and the thorn among the roses; these are the people who in so many ways went out of their way to save a small part of humanity.

This book will give you a clear and detailed view of who they are and what their accomplishments are in times where there seemed to be no hope.

You can begin to appreciate the lives of these heroes by getting your own copy of Holocaust Saviors: True Stories Of Rescuers That Save Holocaust Refugees.

All you need to do is scroll up, and hit the “Buy” Button.